Have you ever been confused by numbering on Housie tickets? 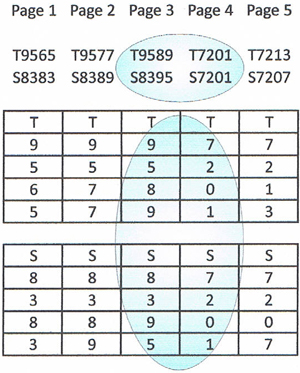 Which of the numbers T or S should you use? And then, to make matters even more difficult you have an Australian-style Housie tickets that carry “Chinese” numbers running vertically!

But these are minor issues compared with the problem of reversion of Housie ticket numbers.

Confused? Well, not if you are a printer and understand how Housie tickets are made.

Do you, like so many, take the “easy way out” and not worry about it?

There are a number of important issues:

In the first place, by law, you are required to only award a prize to a Housie ticket that was “bought and sold” at your venue. So how do you know that you have actually sold a ticket with a funny number that may have been introduced at your venue, without it being paid for?

Then of course you need to be “fair to your players”, the lifeblood of your game.

How do you handle the situation where, having made public that you have sold from book 9019 onwards players claim prizes that are in the 7000 range? Difficult! … so another shortcut?

And there are problems with electronics. Autocall cannot handle reversion of numbers at all. With some clever programming Bingo 21 could, but again if you show the number sold starting at 9019 how embarrassing that prizes can be claimed that are in the 7000 range?

The Ultra Ticket Numbering System uses only one Ticket number, with no “Ts” and no “Ss”.

And this simple process continues throughout the 36000 series of books, regardless of product type.